We serve up some flights and facts for the best game about beer since Beer Pong. 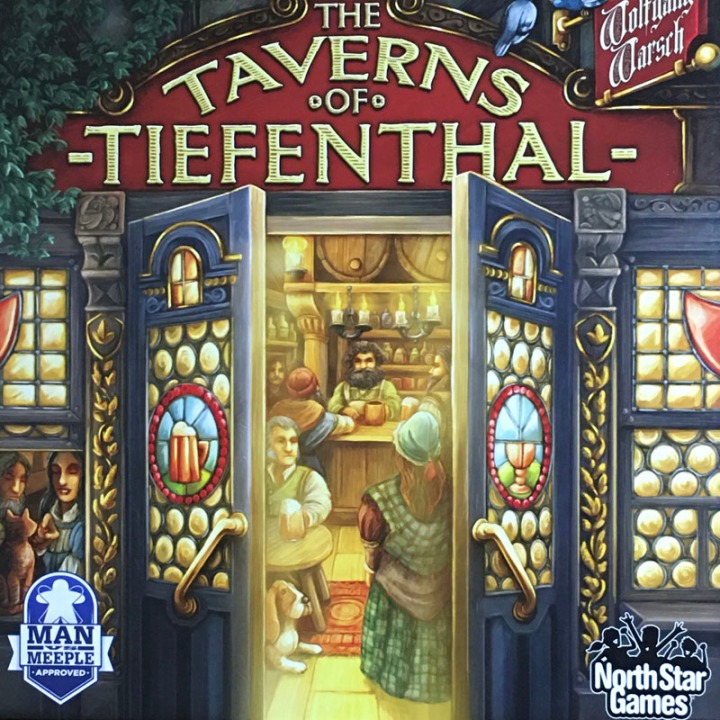 Available from: All retailers

While we wait for the bars to reopen safely, let’s hang out in the virtual pub that never closes; The Taverns of Tiefenthal. Created by the same brilliant designer who invented the equally unpronounceable Quacks of Quendlinburg, Wolfgang Warsch, Taverns also involves a potent potable and Bavarian staple; Beer! They also share a fun, kitschy, renaissance cartoon aesthetic, but the similarities end there. Taverns is its own unique game.

It all starts with the tavern. The tavern is your personal game board and it is a charming and quaint little jigsaw puzzle filled with smoky hardwood tables and gleaming brass fixtures. There are 9 main sections to each tavern, all of which can be upgraded by flipping the individual piece over to the improved and more profitable side. Some sections of the tavern control the production of gold (which the game calls Thalers), and some control the production of beer (which the game calls Beer).

Regardless of what they are called they are both vital to your game. Everything that can increase your beer production costs gold but to get more gold your need more beer. Beer and Gold. Gold and Beer. And Dice! Almost forgot the dice. But we’ll get to that.

Once your tavern is built you need to fill it, with employees, and tables, and, of course, customers. These are represented by your personal deck of cards which will grow over time, so Taverns is also a Deck Building Game. Huzzah! You start the game with 7 regular patrons, 1 waitress, 1 brewer, and 1 extra table. Now you’re ready to open for business.

The game is played out over 8 rounds (nights, with a little moon token) divided into 7 phases (which has nothing to do with the moon). Each phase has cute little titles like, “The Tavern Fills Up”, “Here Comes the Waitress” and “Bring Out Your Dead!” (Okay, that one’s not real.) This section of the rules just feels more complicated than it should be. There are really only 3 phases to each round; the Card Phase, the Dice Phase, and the Buy Stuff Phase.

In the Card Phase, each player draws cards from the top of their deck and places them in and around the tavern. Each card serves a different function. Some employee cards affect the amount of beer you generate and some affect the use of the dice during the next round. The patrons sit at the tables and determine how much gold you can earn each round. In the beginning, your patrons only generate 1 or 2 gold each, but as the game progresses you will accrue wealthier patron who can earn up to 6 gold each.

The catch is that once each table is filled with a patron, your phase ends. Since you start the game with only three tables, your turn can end pretty quickly, while your opponents seem to play card after card. “Siri, add extra tables to my shopping list.” This is the only part of the game that feels like Quacks, although there is no press-your-luck and your tavern never explodes.

Next is the Dice Phase and this is our favorite part of the game. Each round you start with four white dice and for every waitress you have in play you get an extra colored die and thus an extra action for the round. “Siri, add wenches to my shopping list.” Roll the dice, pick one, and pass the rest. Engine building, Deck Building, and Dice Drafting?! Three cheers for having three distinct game mechanics in one game!

Here the game is like a drinking version of Sharp Shooters, where you try to best match the dice with your board, except you don’t know what dice are about to hit your table. Imagine you’re James Bond and you just ordered a martini, shaken not stirred, but instead, the waitress brings you one bourbon, one scotch, and one beer. That’s Taverns of Tiefenthal.

The next phase all depends on how well you did in the last phase. Here you spend all the beer and gold (thalers! whatever) you just earned to improve your tavern. Beer can be used to pay for more and better patrons who earn more gold. Gold pays for more employees, and those tavern upgrades, like a permanent extra table or waitress, or a bigger cashbox or beer cellar to stockpile your earnings. Gold also buys (bribes?) the all-important nobles to frequent your tavern. Because they are each worth a whopping 10 points. Wait. Points? What’s this about points? Is this another mechanic? 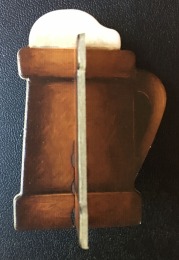 Sort of. You see, all the beer, and gold, and upgrades are only a means to an end. The winner is determined by who has the most points in the end. Everything in the game has a point value but the nobles have the highest by far. While we like almost everything else about the game, this leaves us a little flat. We prefer games that have multiple paths to victory, so that different strategies can still win. Here, whoever has the most nobles wins. Everyone else gets 86’ed.

Last Call. We really enjoyed this game. In fact, we like it even a little bit more than Quacks, because there is just a shade more planning and a little less blind luck. Both kids really like the game as well. It has that perfect level of complexity that is easy enough for a kid to learn but still challenge the adults. Plus, there was no issue with the alcohol subject matter. The kids just think of it as another game commodity like eggs, or cubes, or even thalers. So sidle up to bar and order some Taverns of Tiefenthal. Just be sure to serve the kids Shirley Temples.

As always, Oktoberfest is actually in September, and Drink Up! -er-  Game On!

I am a firm believer in the people. If given the truth, they can be depended upon to meet any national crisis. The great point is to bring them the real facts, and beer. – Abraham Lincoln

One thought on “The Taverns of Tiefenthal”