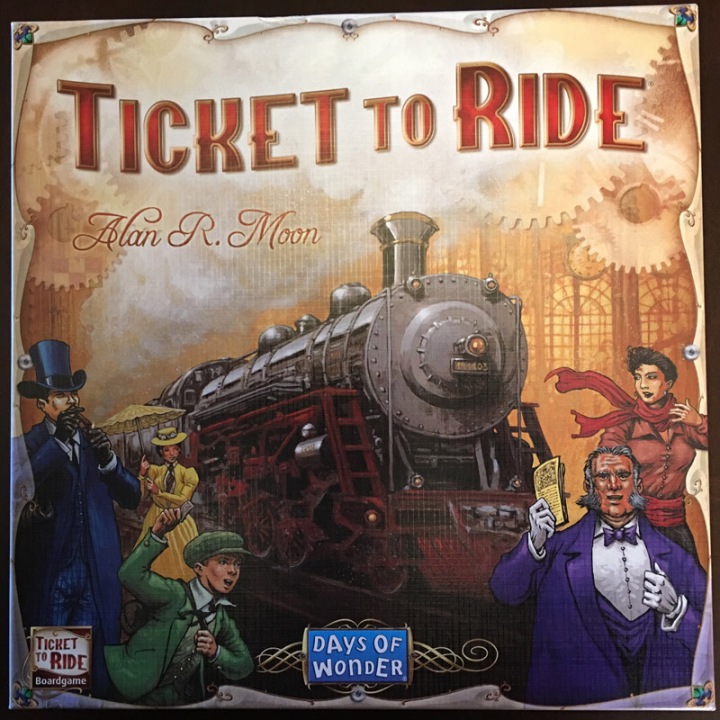 Yes, we know this game came out 15 years ago, and we are a little late to jump on the bandwagon, or in this case the boxcar, but we just love this game.  It is our favorite game of our recent batch of games and should be in every family’s collection.  But if I can convince just one family to play this game then my life will be complete and maybe Alan R. Moon will write me a nice thank you note.

At its core, the game is simple enough that a six-year-old can play it.  Collect cards, match colors, line up trains.  Easy.  Yet the game has a perfect blend of strategy, tension, and luck that there is no perfect plan to guarantee victory and every player has an even shot of winning.

Just ask my youngest who, despite not claiming a single route for the first 10 turns, managed to out-tycoon us all and made a long, continuous track from Florida to Maine and then on to California, easily winning the game.

But most importantly, this game is just fun.  There is something about trains, especially classic ones from the turn of the century that is wistful, cathartic, and playful.  At least once during each game, someone will cry out, “All aboard!”, or “Last call for El Paso!”  I mean, who doesn’t love playing with little choo-choos?

The game is elegant, with a deceptively simple design.  The board is a map of the United States and southern Canada with 36 major cities marked across the country.  Connecting these cities are train routes of varying lengths from 1 to 6 cars long.

Your claim these routes by collecting cards that match the color and length of the route in question. The short routes are easy to collect but earn fewer points than the longer routes which seem to take an eternity to collect the right cards.  Of course, the player with the most points wins.

The other way to gain points is by completing Destination Tickets.  These tickets are the key to winning the game.  But, these tickets may also cause you to lose the game.

So now the game becomes a delicate balance of deciding when to grab a few small routes, just to get some points on the board and when to hoard your cards trying to claim that longer route that just might complete an even more valuable multi-city chain. More importantly, can you do this before someone catches on to your plan and sets out to block you?

Then there is the end of game.  Most games that involve “claiming” territory, such as Monopoly or Risk, tend to devolve into a boring slog with nobody really gaining any ground until all the players cry out in unison “I’m bored. I don’t care who wins. Let’s play anything else.”  But not Ticket to Ride.  This has one of the most gripping and active endings that we’ve seen in a long while

When one player gets down to his last few trains (under 3), then the entire table is given one last turn.  For us, our favorite moment came before that, when we collectively realized that one player was down to his last 5 cars.  At this point, panic set in.  Immediately, everybody stood up at the table and began frantically searching for somewhere, anywhere, where we could play our last few cards and hopefully bump up our score.

Everyone debated out loud to no one in particular whether we should play what we got or take the risk and draw some new cards.  Will that get me what I need or leave me holding a hand full of junk?  Should I grab these guaranteed 2 points, or pray I can hold out for 7?  It was exciting to watch, but even more exciting to play.

I do have one minor quibble about the game that bugged me when I was preparing this review.  The backstory of the game is that we are a group of world travellers who make a bet to see who can visit the most cities in 7 days.  Yet there are no bonus points awarded for doing so.  The player with the longest continuous route receives an extra 10-point bonus, but nothing for stopping at the most destinations.  In the future, I think we will award the player who visits the most cities the same 10-point bonus and see how that affects the game.  Although in the above game, James would have won both, maybe that award should be an either/or situation, not both.

In case you missed it, we loved this game. But is it a perfect game?  Well, yes and no.  It is without question a perfect family game and for that, it received our highest score of 12 out of 12.  Now, there are other games that are more complex, more challenging, more whatever.  But such games are usually too difficult for kids to grasp and enjoy.  Ticket To Ride hits a very delicate balance between fun, challenge and playability.

One other issue with the game is its gradual slide into repetition.  For the first few years, it will be different and unpredictable. But eventually, the same players will tend to play the game the same way.  Coveting the same quadrant of the map, or always going for a certain route.  To combat this, Days of Wonder has released almost a dozen expansion packs.

We will review the expansions in a later review.  For now, suffice it to say that this is one of the best games ever created and you should definitely have it in your family’s collection.  It can be played with kids 6 and up, and will continue to be a fun favorite well into the teen years.

As always, tickets please and Game On!

Trains are wonderful… To travel by train is to see nature and human beings, towns and churches and rivers, in fact to see life. – Agatha Christie

3 thoughts on “Ticket To Ride”