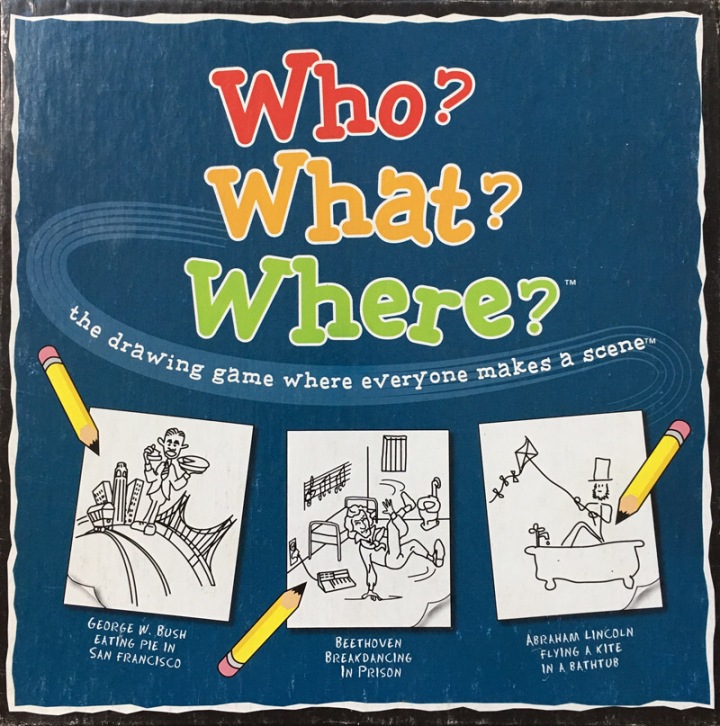 The premise is simple; you draw three cards, a person (Who), an action (What), and a place (Where). Then you literally draw those three cards into a piece of paper. The picture is supposed to be integrated into one single image. But inevitably, one player will cheat and draw three separate images, one for each card. I’m calling you out, Grandma!

All the drawings are passed around and everybody writes down their best guess about each other’s masterpiece. Obviously, the game is fun if you can draw, but it’s even funnier (for everyone else) if you can’t. We always reveal each guess one at a time, and unless the drawing was done by Leonardo da Vinci, each guess gets more ridiculous than the next. Points are tallied but really don’t even matter. It’s all about laughing with your family and friends.

Here at Game Night, Who? What? Where? is on three of our Top 5 lists, and it is my #1 game. Granted, my reasons are self-serving, as I went to school for graphic design and this game satisfies my artistic yearnings. But my kids are not Picasso. So why do they love it so?

We were playing once with the in-laws. The boys’ Grandpa was trying to draw Yoda. Instead he drew this blobby, peanut shaped mess. Our guesses included: Mr. Peanut, a gremlin, a slug, Jabba the Hutt, and Spider-man. Since that day, we have made it our mission to teach Papa what Yoda looks like. We’ve bought him T-shirts and key-chains. We make him watch The Empire Strike Back and pause it during the Dagobah scenes. At Thanksgiving, while everyone drinks from the fine crystal, Papa gets the Yoda glass. It’s all good, for as James, the youngest, says, “In this family, teasing means loving.”

No other game has earned such a place in our hearts. For us the game has transcended beyond just a pleasant way to spend a few hours with the ones you love. That moment has become a part of the family.

My hope is that everyone gets to experience just such a conflux of the perfect moment with loved ones, whether it come from a game, or an event, or a simple shared moment. For us, one of those moments was with Who? What? Where?

Tragically, the game is out of print. I can find no reason why University Games has discontinued the game’s production. There are no sorely needed expansion packs. There is no source to restock the scoring sheets (we just use blank paper). There is no mention of it on the company’s website. There is no Wikipedia page. Even the Junior version of the game, which we also own, has disappeared. After 2012, the games just vanished.

If you already have or can find a copy of the game, hold on to it. And if you can get a copy, then play it. A lot. With lots of people. And especially with your children.

If anyone knows the story of Why Who What Where disappeared, please share it in the comments. If I ever learn How Who What Where came to be missing, I’ll repost this. And if I find out When Who What Where will ever exist again, I’ll definitely report it to you.

Until then, play all the games you can as much as you can. You never know when your Yoda moment will appear.

As always, Yoda does not look like Mr. Peanut, and Game On!