The Village of Phandalin. Another town, another tavern, more helpless NPCs

Today, we learn the lesson that it’s okay to have a bad session. A horrible, boring session, and it’ll be all your fault.

But first, it’s time to start incorporating my players into this fantasy world. Since we are playing the D&D Starter Set, our fantasy world is the Forgotten Realms.

I love the Forgotten Realms. Thank you, Ed Greenwood, for creating such an amazing world filled with wonder and mystique. Recently, I bought “The Sword Coast Adventurer’s Guide”, which describes in detail the small sliver of the Realms where most of the 5th edition adventures take place.

I love the geography, lore, and history of the Realms. But not every player does. Most just want to kill monsters. It is a delicate balance, embodying this rich, marvelous world without inundating the players with tedious text and boring lore. However, there are things that a person who lives in this world would just know, and thus the players need to know these things too.

For my players, I made a handout FAERUN 1479 that briefly describes the common knowledge of the world. Geography, races, factions, religion, money, time, the calendar, and a few important moments of history are included. Feel free to use this for your party. Change any detail that will better suit your campaign. I’ll probably write a more detailed post about the History of the Realms. Soon. Maybe. No promises.

Since our last session, there have been a few changes. Chief among them was the addition of a new player. Jack has an older sibling, Ollie, who decided to play in our campaign.

The second change is that Andrew and I will share DM duties tonight. I will run the ‘ahem’ short role-playing bit in the town and he will run the dungeon in the second half. Andrew is ecstatic and says that he will be prepared.

Let’s see how this all plays out.

When last we left our heroes, after sweeping the Goblin Cave of every scrap of sellable whatever, plus one slightly used Bugbear Throne, oh, and an injured NPC, Sildar Exposition, er, Hallwinter, the party is back on the road to Phandalin.

En route, they meet a very suave Half-Elven Bard, who is so cool that he doesn’t even acknowledge when anyone is talking to him and his catchphrase is “Sup”. Why he’ll be a fine addition to the crew. Hop aboard.

Finally, our road-weary adventurers arrive at the quaint hamlet of Phandalin; tucked in the foothills of the Sword Mountain, renowned for its verdant fields, ancient ruins, and useless NPCs.

This chapter is designed to introduce players to the concept of roleplaying. There are about a dozen characters that the players can meet and interact with. Some have side quests, some have info to advance the main plot, and some are just set dressing.

My players didn’t care about any of this. At all. They just wanted to fight something. They were straight-up Murder Hobos. They tried to pick a fight with the honest trader, the kindly cleric, the joyful innkeeper, the buffoonish mayor, and the stern, and clearly more experienced ex-adventurer who isn’t fooled by any of their shenanigans. 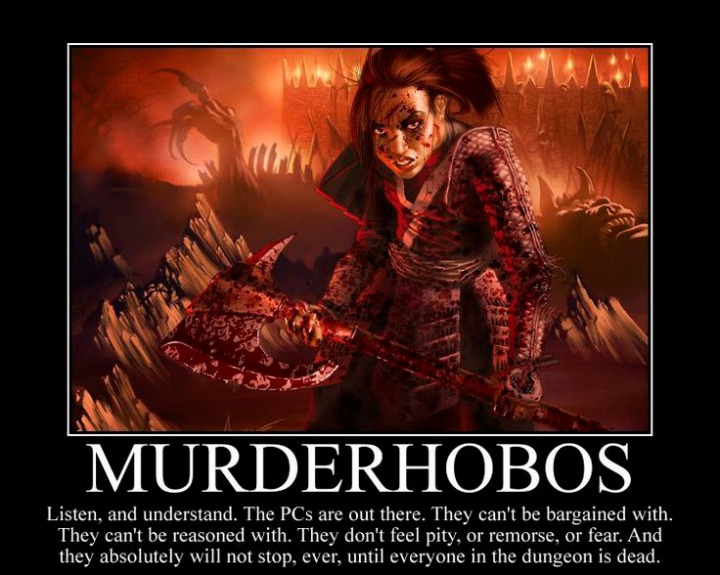 Here is where I utterly failed. I kept trying to throw a new character at them, thinking that they would find one they wanted to engage with. I also wanted them to meet all the key players in town because they set up all the further adventure hooks in the next chapter.

This dragged out a brief 20-minute bit to well over an hour. Plus, the players remembered none of the hooks and eventually we had to replay the whole chapter over again. Part of the problem is that, my players are just kids. They didn’t want to talk. They wanted to fight. Basically, I tried to force them to do I wanted and not what they wanted. Granted they never really told me what they wanted, but I should have guessed.

Amongst all the boring story bits, they learn that the town lives in fear of a gang of thugs called the Redbrands. Boring. They recently murdered a villager and their family has disappeared. Who cares? The leader is a mysterious figure, called the Glassstaff. Whatever, just point the way so we can kill them.

There are times when no matter what you do, the players just won’t engage with the story you have prepared. This is okay and it is nobody’s fault. Every DM, including myself, has to learn how to read your players. Try and give them what they want. If all else fails, throw a combat encounter at them.

I wish that I had used my combat encounter with the Redbrand thugs much earlier. Once the players started pushing a few townsfolk around, the thugs should have come and threatened them for moving in on their action. Ignore the role-play until after they clear the hideout. None of the NPCs are going anywhere; use them when the players are ready.

The only NPC they didn’t want to murder was the young Halfling cousin of the thief. His name is Pip, and he spoke in a breathless mile-a-minute cadence that my kids thought was funny. Pip was able to show them the secret way into the hideout.

The best part of this chapter is the variety of ways that the party can enter this hideout. They can go in the front door. Or they can use the secret door, as my group did. They might be captured and wake up in the prison cells or they can even convince the thugs that they want to join. The remainder of adventure dungeons are all very straight forward in comparison.

Andrew took over the Dungeon Master duties and he did a really good job. I told the other players that I would not make any real decisions since I knew the dungeon and that would ruin the fun.

Because the player used the secret entrance, they end up in the middle of the dungeon. This middle room has a monster called a Nothic in it. This is a one-eyed aberration that communicates by telepathy before it tries to eat you. Andrew did a really good job of playing this with one-word dialog, like “Feed”, “Give”, and “Eat”. Jack had the idea of feeding the creature. This pacified it and allowed the players to proceed.

I meta-gamed here and took my/Andrew’s character down into the small chasm in the room to get the magical sword, because I could tell that Andrew would have been unhappy if they missed it, and no one was making any plans to look down there. So, kill me, I still want my kids to be happy.

Jack’s thief found a secret door, which led back to the beginning. But they thought it would put them further into the dungeon. In this front room, we stumbled upon three bandits and again Andrew did good running combat.

Sadly, by this point, because I took so long with all the town garbage, I could tell that the kids were losing focus again. Andrew was disappointed and wanted to go further, but we stopped here. I told Andrew that he could continue being the DM, which made him happy and is what I wanted anyway.

So kids, the main lesson today, is that it is inevitable that at some point a session will completely stall. The simplest way to fix this is to have a “random” encounter. A quick combat switches a player’s gears from problem solving thinking to tactical thinking. And usually, after the combat, a new solution to whatever problem bogged down the game will present itself.

Next week, we have the best session of the campaign, with disappearing chairs, fixed dice, and inspiration tokens galore.

I’ve also created a Lost Mine of Phandelver Resource Page that includes everything I used to run this adventure all in one place. Session Diaries, Maps, Handouts, Stat Sheets, Everything. I hope this helps. Enjoy!

As always, after a bad session, the next one will be better, and Game On!

Crush your enemies. See them driven before you. And to hear the lamentations of their women – Conan the Barbarian, King of the Murder Hobo