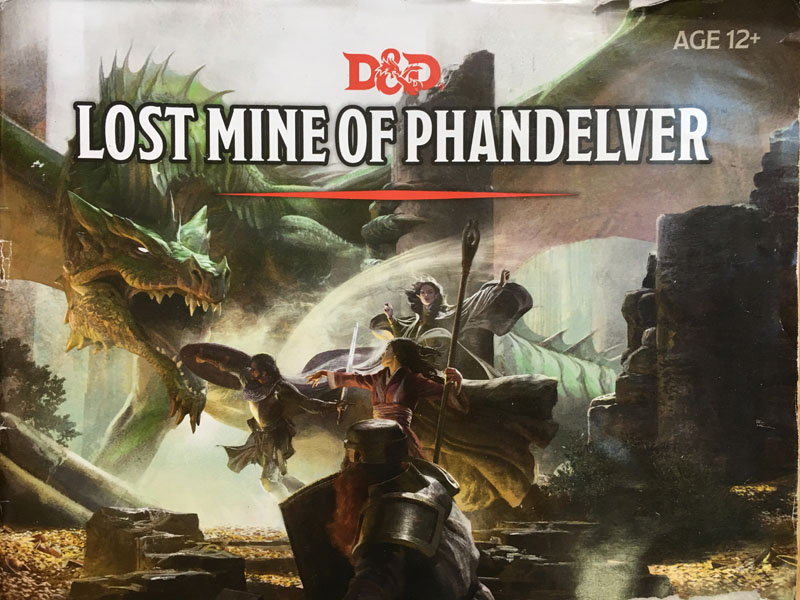 The Lost Mine of Phandelver is the introductory adventure for the 5th Edition Starter Set. It is designed for PC levels 1 – 5 and has a good mix of wilderness, dungeon, and village encounters with a decent story. Before the adventure, I gave my beginner players a brief summary of adventuring and combat basics – Rules FOUR PAGE. I also gave them a Setting Overview for the Forgotten Realms set in the year 1479 DR, the official year of this adventure – FAERUN 1479. However, if you’d rather run this adventure in line with the rest of the 5th Edition adventures, those take place starting in 1492 DR – FAERUN 1492.

What follows is a complete overview of our experience playing this adventure. There are three sections:

The Campaign Diaries – The full Tale of the Saviors of Phandalin as they attempt to collect on a $50 debt.

The Maps – All the maps that I used to run The Lost Mine of Phandelver, including some custom maps. The Player Maps have all hidden locations, traps, and secret areas removed. They are also great for a virtual tabletop.

The Handouts – The module came with one handout to give to the players. I added 10 more. Most handouts provided further motivation for the players to want to hunt down the main villain, Nezzar, since he has no contact with the players until the last chapter. A few set up future adventure hooks. I usually print them using a variety of construction and specialty papers cut to fit my printer. The Handouts can be printed as is or used as a starting point for your own creative spin.

If there is anything else that you think I should have here to help you run your own campaign, please leave a comment.

Session 1 – Our merry band of mercenaries manages to lose their patron in five minutes and violate the Geneva Convention in ten.

Session 2 – The Mercs with No Name sack a goblin cave, collect some second-hand furniture and find an NPC that I call Captain Exposition.

Session 3 – The Mercs invade the peaceful village of Phandalin, try to be Murder Hobos, and pick a fight with the local gang of thugs.

Session 4 – The Mercs storm the Thug Hideout, pet some monsters, obtain the world’s ugliest valet, and play a wild game of Liar’s Dice.

Session 5 – Gather round while we replay the entire Phandalin section and then go off in search of the creator of the Forgotten Realms.

Session 6  – The Mercs find the ruined town of Thundertree, the spirit of Ed Greenwood in a batty old druid, and, holy crap, a green dragon!

Session 7 – We start with a TPK, then battle a very colorful sorcerer and take on the dragon! At level 2! And they steal some dragon eggs.

Session 8 – The party arrives back in Phandalin to find that everything is not as it seems. Then they trash the only good inn in town.

Session 9 – During the Festival of Greengrass, the goblin army invades Phandalin. Our heroes risk it all to save the village they call home.

Session 10 – The newly dubbed Saviors of Phandalin search for the mysterious four-fingered man and find the bum who owes them $50.

Session 11 – The Saviors finally get to Chapter 5, only to find zero treasure, just strange chucks of humming metal. And a ton of ghouls.

Session 12 – The Saviors negotiate with Nezzar, the evil puppet master, by stabbing him with a sword. Then evil spider god, Lolth, shows up.

Session 14 – The thrilling conclusion. The humming metal pays off, secret villains are revealed, and there’s lots of ominous foreshadowing.

That’s it. After 20 sessions that took over a year to complete, we finally concluded the epic Lost Mine of Phandelver. (We played every other week for only 2 hours per session, the limit of a kid’s D&D focus)

We hope that you have as much fun and excitement when you run this adventure. Feel free to use any, all, or none of these extras that I used to run the adventure. Hopefully, you can use them to inspire your own epic adventure.

As always, it’s better to show than tell, and Game On!