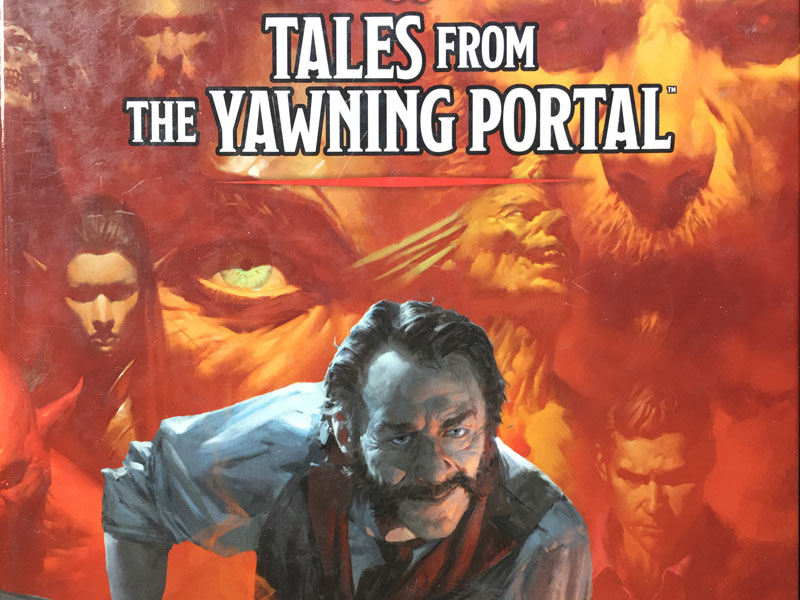 The Sunless Citadel is the first adventure presented in the 5th edition compilation book, Tales From the Yawning Portal. It is an introductory adventure, first developed for the 3rd edition D&D back in the year 2000. Designed for PC levels 1 – 3, the adventure dungeon has two distinct levels. The first has an interesting dynamic between two rival tribes (one kobold and the other goblin) as they vie for control of the upper level. In sandbox fashion, the players can choose which faction to support and have a variety of ways to acheive victory. The second level is a classic dungeon crawl as the party works to defeat a mad Druid who controls an evil tree borne from the corpse of a vampire and his army of blights. The players also have to contend with the remnants of the evil cult that built this citadel, and there’s even a petulant dragon. 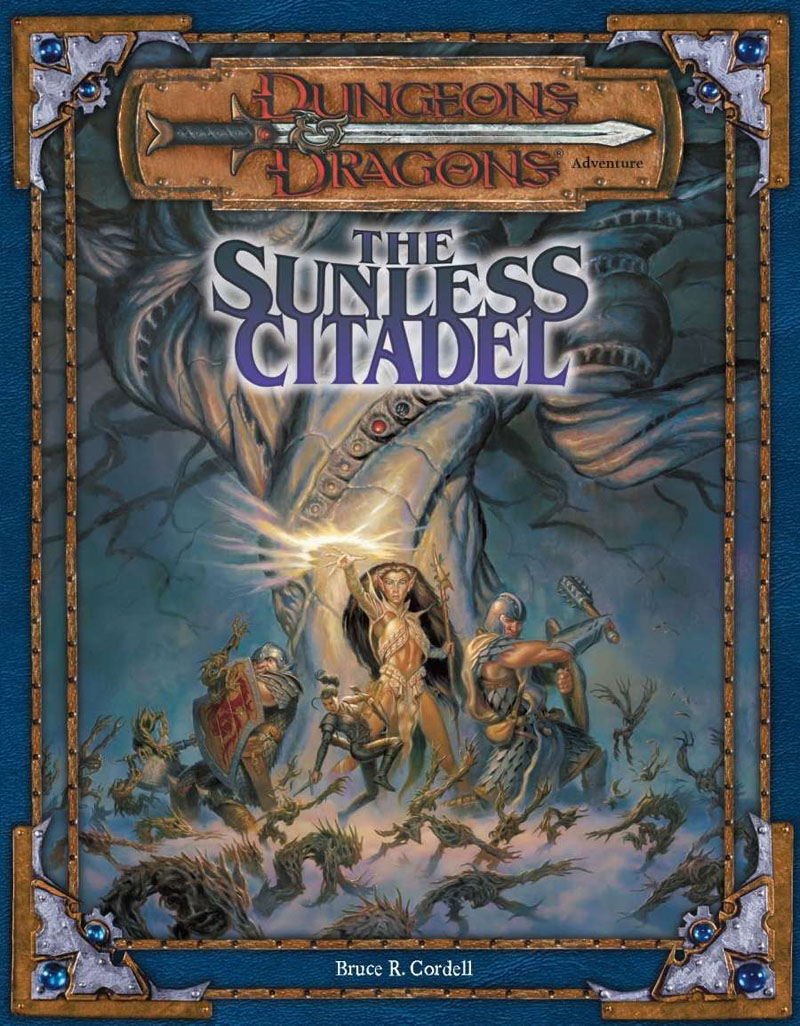 What follows is a complete overview of our experience playing this adventure. Bear in mind that my players were all 5th level when we started the adventure, so I had to boost most of the monsters in abilities or numbers to make it challenging for my players. Also, we played this campaign during the 2020 pandemic, so I also discuss our successes and our failures at playing the adventure remotely.

There are five sections to my overview:

The Campaign Diaries – Our heroes go on a quest for a missing group of adventurers, led by a strange man and his miniature giant space-hamster.

The Charts – I always make at least two charts to organize my adventure; an Encounter List and a Monster Stats sheet. I’ve included charts from the base adventure and my modified version for 5th level characters.

The Maps – All the maps that I used to run The Sunless Citadel, including some custom maps. The Player Maps have all hidden locations, traps, and secret areas removed. They are also great for a virtual tabletop.

The Images – They say a picture tells a thousand words, so I included all of the images I used to help tell my story, including those found in the original printing of the module.

The Extras – I used very few handouts during this adventure, mostly because we played the entire session virtually via Zoom. So here, I included all the steps I took to run the game remotely and how to create your own Fog of War maps. As for the handouts, I usually print them using a variety of construction and specialty papers cut to fit my printer. The Handouts can be printed as is or used as a starting point for your own creative spin.

If there is anything else that you think I should have here to help you run your own campaign, please leave a comment.

Session 1 – Our heroes agree to commit goblin genocide for the price of a single iron key, and then get trapped behind enemy lines.

Session 2 – Our heroes storm the goblin camp. They almost get wiped out by some rats, rescue a creepy gnome and impersonate a god.

Session 3 – Our heroes invade the lower level. They kill some stuff, add to their menagerie, and one hero turns Chaotic Stupid.

Session 4 – The penultimate conclusion. Our heroes fight an epic battle with wizards & druids & trees, oh my. Oh, and there’s a vampire.

Session 5 – The actual conclusion. Our heroes finally get that iron key and instantly regret ever wanting to see what it opened.

Here are the two charts I make to better organize my adventures. First is an Encounter List that includes each room at a glance, including its location, monters and NPCs, traps, treasures, experience points earned, and any other special features of each room. 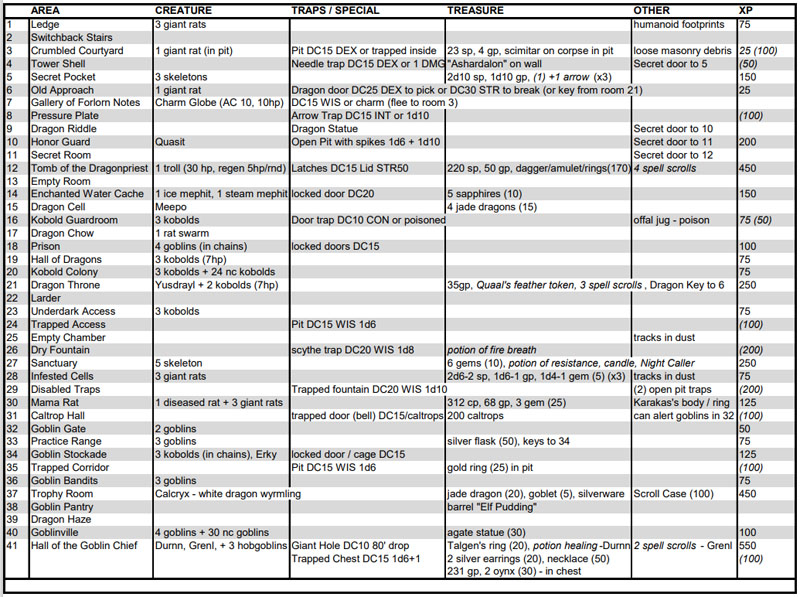 Second, I like to have a Monster Stat sheet that has every monster and NPC in the adventure listed with all of their important stats all on one page. This saves my from having to having multiple books open when combat begins. The stat sheet should be self-explanatory, but for further details about this and all my other charts, check out my Dungeon Master Resource Page 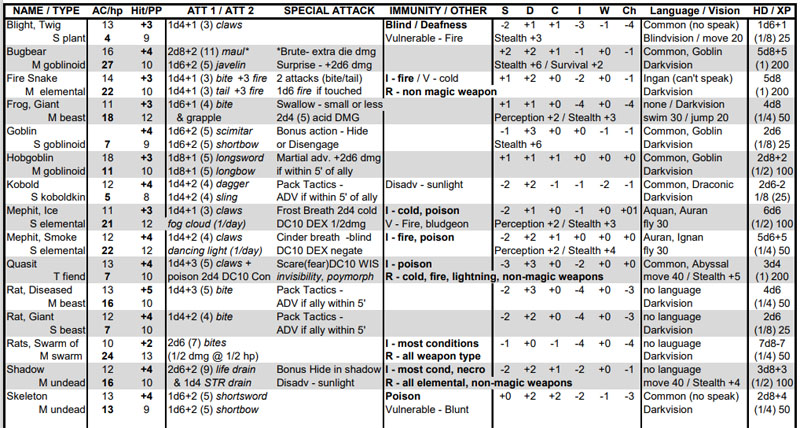 When I ran my players through this adventure, they were all at least 5th level, which made them way too powerful for this 1st level adventure. I’ve included a modified Encounter List and Monster Stat sheet, adjusting most of the encounters to reflect their higher level and adding some new traps. I also included all of the newly-leveled NPCs and additional monsters that I used in the adventure, such as the Vine Creeper, my improved Dragon Priest, and the vampire, Gulthias. Here are the links:

I prefer the maps that come with the Yawning Portal reprint to the original, but both of them have a few minor issues. The first is that the map does not include every trap listed in the adventure and I found that I would forget to include it during gameplay, so I added all the traps on my modified map below. I also included more traps which I indicated with a blue “T” and describe in the applicable session diary. Second, it alway bugged me that the goblins do not have their own entrance to the Citadel. It makes no sense that they have to go through the Kobold area to enter or exit. I added a series of rock ledge “stairs” north of the Guard Room #36. Lastly, I changed the nature of Room #7 significantly and I altered the map to reflect this.

I’ll start with the pictures that came with the 5th Edition reprint presented in Tales From the Yawning Portal, followed by those that were drawn for the Original publication, and then I’ll include a few others that I appropriated (i.e. stole) from other sources.

A few extras from unnamed sources.

I only used one handout during the adventure and of course it has a typo in it where I refer to the Hobgoblin Chief by the wrong name. But it does do a good job of answering most of the story’s questions should the dialog with Belak go as poorly as it did in my game. Plus, it gives a method to restore the enthralled adventurers should you desire that. 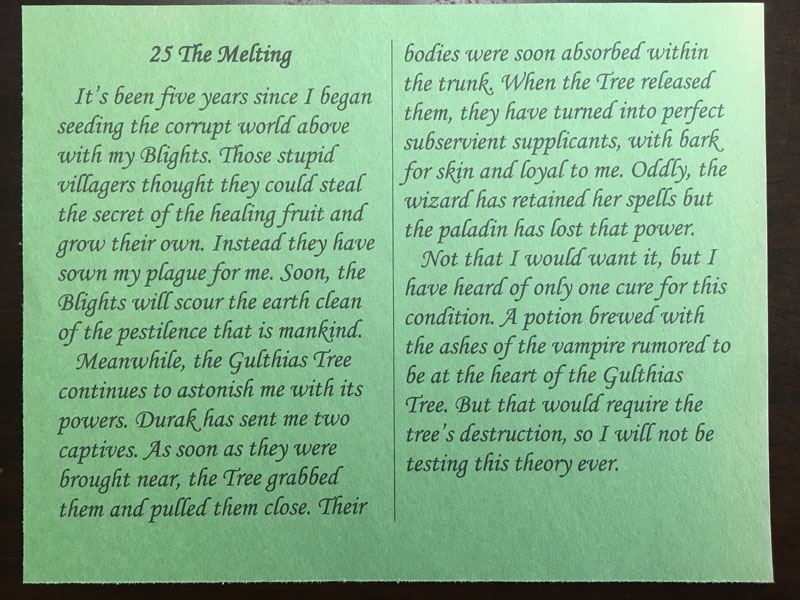 Due to the Pandemic, we began the adventure playing remotely. There are a number of wonderful products and websites that facilitate this style of  roleplaying, but I was curious to see if it could be done completely for free. It can but it wasn’t great. It was functional but it requires a fair amount of pre-planning and a lot of forgiveness from your players.

We generally play on a dining room table, but for remote play I set up a card table inside our home office. The battle mat goes on the card table and the two boys sit there. I am next to the table and next to the office desk which has the computer on it. The computer will have the map of the dungeon which I have loaded into Photoshop to run a poor man’s Fog of War for the dungeon. I then set up three camera phones (mine and the boys’). One camera is propped up to view the computer monitor, a second is on the desk looking at the players, and the third is attached to a flexible floor lamp, looking stright down at the battle mat on the table. I set up a Zoom call between the three phones and my remote players’ Ipad and we had a rough-around-the-edges but free Remote D&D session.

My biggest task for this play was creating the Fog of War effect for the dungeon. I used photoshop and here is my step-by-step method for creating your own.

Now I may not have had many handouts, but I did paint over 50 minis just for this adventure. Here’s a gallery of most of them.

So that’s about it. If there is anything else that you wish I had included in this Sunless Citadel Resource Guide, please let me know.

And if you like these Resources pages, then check out the ones I’ve created for the other campaigns I’m running at the D&D Campaign Resources Page.

As always, it’s better to show than tell, and Game On!