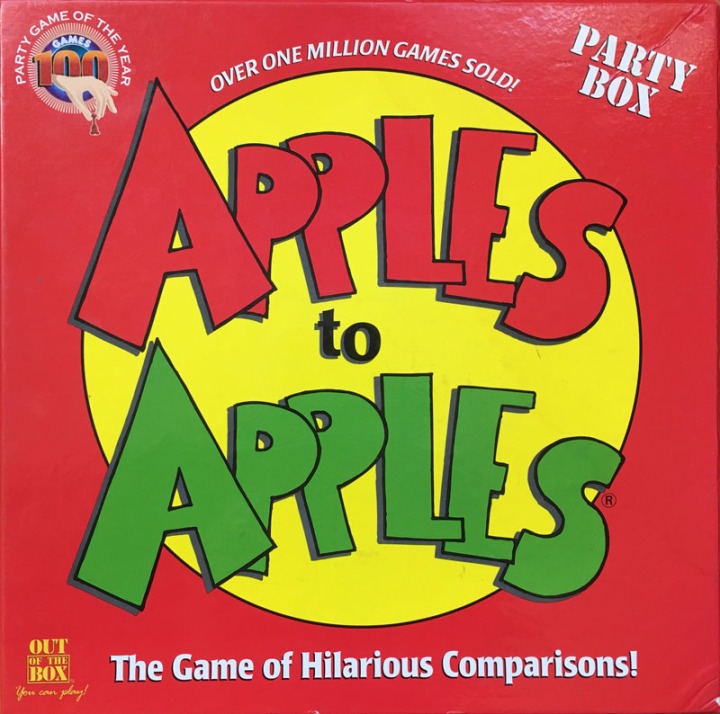 The Game of Hilarious Comparisons that is beyond Comparison

Here it is, the granddaddy, the original, the creator of an entire sub-genre of tabletop party games.  Without Apples to Apples, games like Bubble Talk, Snake oil, Say Anything, and the sadly ubiquitous Cards Against Humanity would not exist. This whole genre of games hinged on tweaking one simple game mechanic. And just what is this revolutionary game mechanic introduced in this inauspicious, ground-breaking game by a fledgling, forward-thinking, Out-of-the-Box Company (who later sold out to Mattel)?

Who put this idiot in charge? Well, until 1999, most party games involved one player performing or providing clues for a group of “judges” who tried to guess the correct answer, as in Charades or Pictionary. Now, with Apples to Apples, the roles are reversed. The judge presents the question and the others players provide their answers from their hand of cards. The judge then chooses the “correct” answer, but there is no correct answer.

For the three of you who don’t know, the game has two deck of cards. The green deck has a single descriptive word on it. The red deck has a person, place, or thing; you know, a noun. The judge reads the green card and the players choose the card, of the 7 in their hand, that best represents that description.

However, your hand will never have that perfect match card. Instead, you’ll have a bunch of unrelated junk that seem to defy any description. This is where the “hilarious comparisons” comes in.

Now come the best part of the game. The Reveal. We always have the judge read every card out loud. Debates ensue. Lobbying is allowed and bribery is encouraged. Indignation is feigned when your terrible card is summarily discarded. The winner with the least horrible answer is awarded the green card and play resumes with a new judge.

It goes without saying, this is a great game. Perfect for a small family game night and for a larger party of adults.  This game appeals to all people and personality. It has the perfect level of social interaction without excluding the shy. There are plenty of variant rules to further monkey with the rules. We play with the Rando Cardrissian variant we stole from Cards Against Humanity. We add a random card from the top of the draw pile and pray that his card isn’t better than our pile of garbage.

So at what age can the kids start playing this? The official Red box says 12+, the Junior version say 9+, the original Brown box says 10+. All these are way too old. Our kids have been playing this game since they could read, around age 6. We played with the Junior version, which has more recognizable words and includes activities, like “Going to Disneyland” or “Brushing your Teeth” into the red cards. Around age 10, we switched to the “adult” party box, with one mercy rule – they could throw out any red card they didn’t recognize.

Apples to Apples does have one glaring limitation though. This game demands variety and an ever-changing field of players.  Without it the game gets stagnant and begins to lose its appeal. It is perfect for new groups or to get to know your new friends, but  grows stale when it’s the same family of four every time.

On top of that, my kids would play this game until the box is empty, dragging the game out into a tedious two-hour slog.  Be strong. Set limits. Tell your kids, “No more. Stop all this bonding nonsense. Go watch some TV or something.” Okay, don’t do that, but do end the game after a reasonable time; 30-40 minutes, tops.

If you haven’t already, go buy this game. But use it in moderation.

As always, “the apple doesn’t fall far from the tree” refers to your children, so raise ’em right and Game ON!

How do you like them apples? – Jake Gittes (Jack Nicholson), in “Chinatown”

2 thoughts on “Apples to Apples”