Summer is almost here and you know what that means; stuffing all your crap into a little box on wheels, then jamming it and yourselves into a little metal box on wheels, hot, sweaty, stinky, and cramped until you arrive at some tiny little room, hut, cabin, tent, yurt, or worse, Grandma’s house. And what does any self-respecting game addict pack in his suitcase? Travel editions of his favorite games, of course!

But space is limited; which ones to bring? Well, we’re here to help. Today we review our Top 10 Travel Games. But first some ground rules.

The game has to be its own unique game and not just a travel edition of a full game. For example, the travel edition of Catan is incredible. They managed to shrink every element of the entire game down to travel size. But the smaller pieces are rather unwieldy and the game is truly so much better in its full-sized edition.

Likewise, any game that is just a pared down version of a full game is excluded. We do this all the time; we’ll take a bunch of Trivial Pursuit cards and read them in order, without worrying about pie wedges or “winning”. Or we’ll grab maybe 100 or so Apples to Apples cards; wrap ‘em in a rubber band, and just play with this smaller deck. Feel free to do this on your own vacation, but they won’t make our list.

One last exclusion. We won’t include any playing card variant games. Yes, they are definitely travel sized and, spoiler alert, a deck of playing cards will make this list, but there are so many types and styles that they deserve and will receive their own list. So, games like Mystery Rummy, Red 7, Uno, Phase 10, and our latest obsession, Illimat, will just have to wait.

A great little secret identity game, where you try to eliminate the other players using deductive reasoning, process of elimination and sometimes sheer luck. You are dealt one “Character” card. Each character has a unique ability to help you, but your identity changes with each played card, requiring you to change tactics throughout the round. An easy to learn and hard to master game that plays differently every time. The original game has a medieval theme but there are a plethora of themes to choose from.

A cute, fun game with a neat theme that is still safe to play even if you’re allergic to shellfish. Try and amass the highest score over three rounds by collecting the best assortment of raw fish. Each type of sushi has a differing set of scoring rules requiring you to decide between the low-scoring single cards or risk it for the higher scoring sets.

Our favorite part of the game is the Lazy-Susan, revolving circle of sushi cards. You draw one card from your hand and then pass the rest to the player on your left. Since you’re getting a new hand every turn, you never know what kind sushi you will get, just like those conveyor-belt sushi bars in Japan.

The easiest game and the smallest game on our list. Just three dice and some chips. There is no strategy or skill involved to inhibit game play. Roll the dice and move your chips accordingly to the player on your left, your right, or into the center pot. The last one with chips is the winner. The game is pure luck, and yet despite the randomness of it (which I usually do not like), the game is still fun and satisfying. And quick; each “game” is over within a few minutes but you will absolutely play more than one. Our kids have loved this game ever since they were old enough to not swallow the dice.

A fun, fast, and colorful dice game which should be a legal word in Scrabble, but isn’t. By rolling the cool colored dice, you try to get the highest score by arranging those rolls in numerical order. The trick is that some of the colors are arranged in ascending order while others are descending. And once you choose a number you can’t choose another number “below” it. Score points by getting more numbers in order while avoiding “dead” rolls. A quick and elegant game.

There is another game called Noch Mal! which uses colored dice, and marked off dice combos, and that many in my game family love. But I refused to put it on the list because I despise Noch Mal! I have just one word for Noch Mal! – Scheisse. 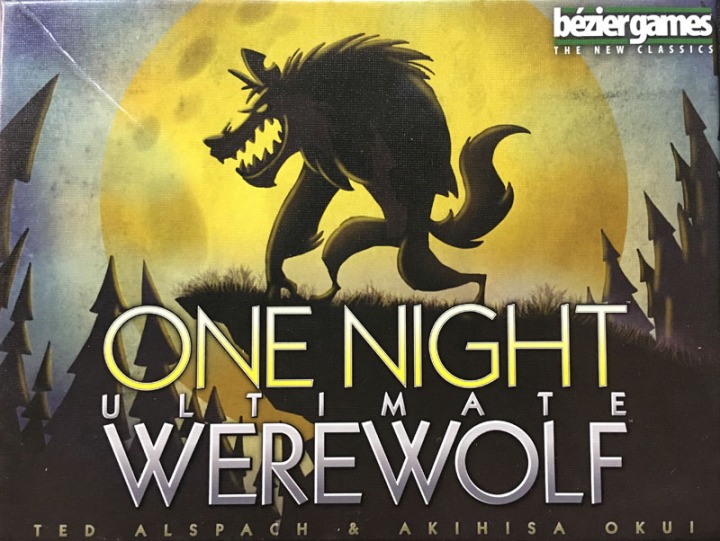 Another, slightly better secret identity game, except that instead of eliminating every other player, you only have to eliminate one, the werewolf. The problem is that all your friends are no-good, lily-livered, snake-tongued liars and you can’t trust none of them! This is the most fun you will have deceiving the ones you love. The game is vastly improved when used with the One Night app, which places all the actions in the proper order and instructs you how to play as you go. We are taking a family reunion cruise this summer and we are gonna try and have 23 players a one table at the same time. Wish us luck.

All the fun and excitement of the commodities trading market, but without all the bankruptcy and heart attacks. Do you remember the scene in “Trading Places” where Eddie Murphy and Dan Ackroyd stick it to the Duke Brothers and corner the orange juice market? That is Pit. The goal is to be the first to acquire 10 cards of any one type of item from gold or platinum or oil or cattle. This is done by trading cards with your fellow players and yelling. Lots and lots of yelling. But fun yelling, not angry yelling. The game is simple, fast, and has cornered the market on fun. 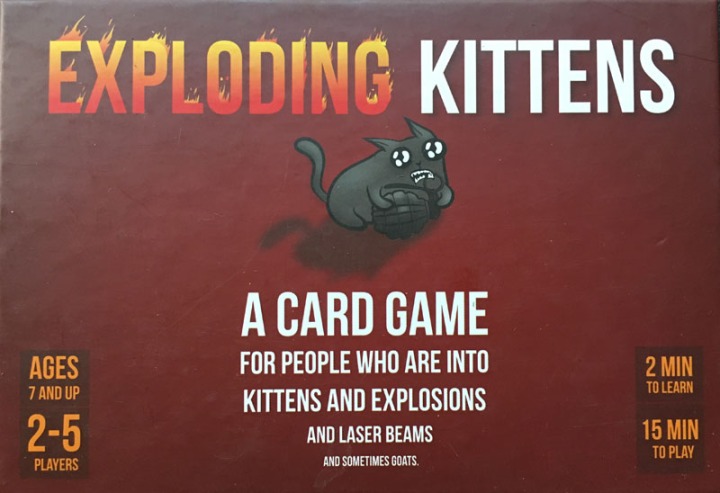 I was initially hesitant to let my kids even know about this game because I thought that it was a NSFW adult game involving gruesome acts committed to our feline friends. It still is, except for the adult part. Somehow strapping 20 pounds of TNT to Mr. Crookshanks and blowing him to kingdom come is now cool for the kiddies.

Mechanically, the game is a last man standing elimination game and the kids love it. Game play is easy to learn and is just strategic enough to satisfy both kids and adults. Plus, the sarcastic humor of the game is risqué enough to let kids think they are being profane, but not enough to start a parental protest. 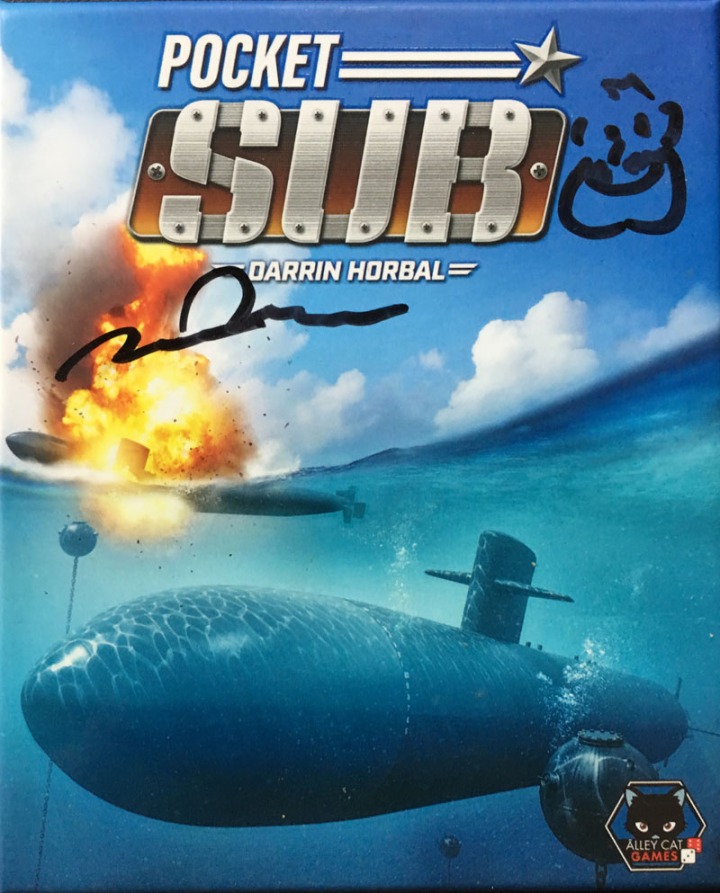 Incredibly, this is the only true board game that made our list and we just can’t get enough of it. The game is simple and straightforward and yet strategic and challenging at the same time. Navigate your subs around an increasingly shrinking ocean, planting mines to trap your opponents, but beware that you don’t maneuver yourself into an inescapable watery grave. The game requires different and unique tactics depending on the number of players. The game even has two versions in its small box, a base game and an advanced set with even more strategy and challenges.

The second most popular dice game after craps, but I have no idea how that game is played, so let’s talk about Yahtzee. C’mon, who doesn’t love this game? Who doesn’t love to yell “Yahtzee” to punctuate an unexpected victory? Or is that “Bingo”?… Regardless, Yahtzee is a great game, travel or otherwise. A perfect blend of simplicity, luck, strategy, and daring.

To be fair, our version of the game came in a giant box for no apparent reason. We never even use this box and just keep the 5 dice in a Ziploc bag which travels very well. Plus, if you add one die you can play Farkle, another good family dice game. And if you remove three dice, you can play the aforementioned craps. Of course, you also need to bring along a giant felt-lined table and a croupier, but those should be easy to come by. 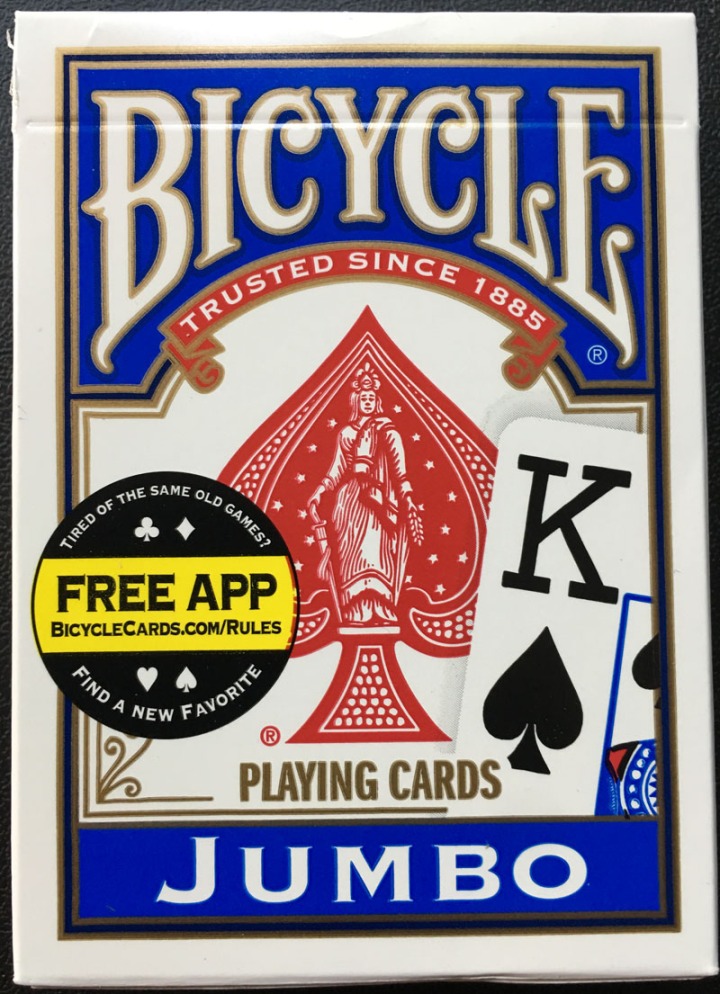 You knew this had to be number one, right? It is the most versatile piece of game equipment ever, and it can literally fit in your pocket. There are over a thousand games you can play with just one deck of cards, from Solitaire to Go Fish to Bridge. You can even build a house with them. You probably already own about a dozen decks and at least one of them you’d be embarrassed to show your mother. (My embarrassing deck came from the Riviera Casino in Las Vegas.)

One of these days I’ll have to do a historical perspective on playing cards. Maybe. No promises. Probably not. But until then, get yourself a copy of Hoyle’s and play more card games.

What is your favorite travel game? Did we miss any? I know that even our list is incomplete since I can think of three games off the top of my head that I wish I could have included. Kodama is a unique and beautiful game but even though the box is travel sized, you need a really large table to play on. Iota is the tiniest game we’ve ever seen (smaller than a box of tic-tacs) and it is great fun but a little complex for the little ones. Mille Bornes is one of my favorite childhood games. I have very fond memories of playing this at my Grandma’s house, but I just can’t get my family to play it. Maybe someday I’ll do Travel Games Part 2. Maybe. No promises. Probably yes.

Vacation’s all I ever wanted. Vacation, have to get away – The Go-Go’s